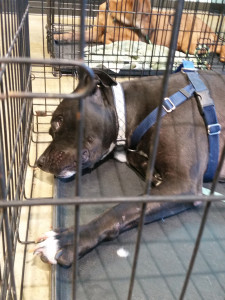 One of the best parts of volunteering with PPA is getting to know the personalities of all of the animals. Each breed has their own characteristics, but just like us, each pet has their own character, and there is none bigger than Maxwell’s. Maxwell is our resident clown. In true bully breed fashion, he is a lovable lug who just wants to entertain and have fun. At first glance, one might find Maxwell a bit intimidating. He is a stout fellow, but Maxwell is a gentle giant. He loves to be scratched and give kisses. He’s known to jump around in his crate and roll belly up when he’s excited to see people, but Maxwell has one much more prominent character trait. Maxwell has an insatiable love of squeak toys; one like I have never seen before.

It was a normal Saturday adoption event. We had a number of small and large dogs at Phydeaux and Friends*, in hopes to find some forever homes. The beautiful new store was buzzing with customers, their pets, and employees. I began to take the big dogs out for bathroom time; walking them from the back of the store to the front entrance. I saved Maxwell for last because I knew he would want to wander around and say “Hi” to everyone in the store. He was doing great, curious as always, he would walk over to vignettes and displays take a sniff and move along. As we neared the front of the store, and what should’ve been the proverbial Achilles heel to Maxwell’s calm strut through the aisles, we approached the racks of toys. Instinctively, I tightened my grip on Maxwell’s leash, preparing for his walk past the toys. He stopped, and sniffed, but with a quiet, “Leave it” he continued on his way. What a good boy! Maxwell had made it past the squeak toys without even attempting to grab one to go. I was so proud of him.

After the potty break, as we walked back into the store we stopped at the doggy water fountain that was precociously placed next to the racks of squeak toys. I had nothing to worry about; Maxwell did such a good job when we went out, surely this behavior would continue. After a short water break, curious Maxwell wanted to wander around the toys, just to sniff of course. It was as we made our way out of the maze of toys that the afternoon took a chaotic, albeit hilarious turn. A customer shopping in the toy racks squeaked a toy. This ignited the spark and Maxwell was on a mission! He ran toward the squeaking, stopping at every rack along the way to grab up toys. Toys were flying, Maxwell was a tornado of toy snatching excitement, surely the Benny Hill theme song was playing in the background. At this point, the only way to stop the madness was to give in and let Maxwell take a toy. “I’ll just pay for it”, I told the cashier as Maxwell dragged me to the back of the store. He was so excited to get back to his crate and tear into his new treasure. Within 5 minutes, the toy was destroyed, and Maxwell was the happiest dog in the store. A $5 toy was a small price to pay for this million dollar smile! 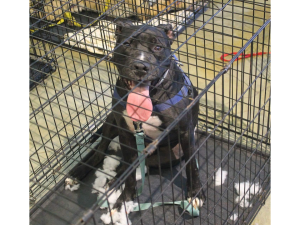 Email adopt@pflugervillepetsalive.org to meet this guy!

0The Effects of An Animal Shelter On A DogHeartworm Disease & Pets